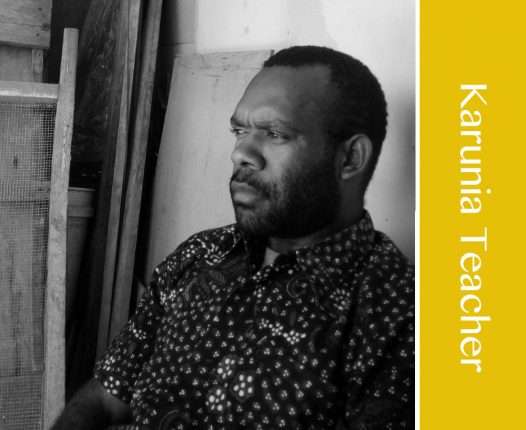 From student to director: How Onni became a Papuan role model

Onni was born in 1987 or 1988, he doesn’t know exactly. He grew up in Bolakme, a little higher in the mountains not far from Wamena, in a honai (traditional Papuan hut). His father is a well-respected man, a model figure in the village. Onni is proud of him and would like to follow his example.

In 2007, he was admitted to the teacher training college, because his father believed in the approach of the college. But Onni does not want to become a teacher at all. Only in the second year of study it starts to dawn on him that he is in this school for a reason. Practice teaching at local schools open his eyes to the miserable state of education. Teachers are often absent and children can barely read and write even in the upper grades. In his country, among his people. This affects him and makes him feel responsible. The choice is made. He wants to become a teacher.

Then Onni develops into a studious, bright student. He listens, researches and lets the Bible speak into his life. Eventually he becomes an assistant teacher at the teacher training college, then – after graduation – a teacher and becomes vice director for student affairs. In Java he earns his master’s degree and since 2018 Onni has been director of our teacher training college. Slowly but surely, he develops into a wonderful example for Papuans, someone students can emulate, who remains calm in difficult situations, but can also act when necessary and has authority. His father can be proud of him.

Yamenserdi Larate (39) is from Manado, North Sulawesi, and was sent by his church as a missionary worker to our

This is Arniati Kogoya, 30 years old and a teacher on our campus. She was born of a mixed marriage

We would like to introduce to you one of our kitchen ladies: Maria Apay. The mutual collegiality, inside and outside